Regardless of cause, the bulk of contact damage occurs during the first few milliseconds while power switch or relay contacts are bouncing or settling.

I include step-starts or “soft-starts” in designs only as necessary, the need primarily determined by the transformer style or other inrush determinants. It is important to mention to this date, there never been documented tube life changes in amateur radio power level amplifiers. Step-starts or soft-starts primarily improve switch and contactor life, as well as reducing annoying false breaker openings or fuse fatigue. Step-starts also reduce or eliminate unimportant starting noises, such as cabinet “thuds”. Don’t count on them magically making a transformer or tube last years longer.

How Soft Starts and Step Starts Work
Step start systems insert a series resistance in the primary power source path. This start resistance can be inserted in either line lead, or in both line leads. Maximum possible inrush is found with Ohm’s law, E/R = I with E being the peak supply voltage and R being the total effective start resistance.

This start resistance is removed three ways:
1.) By a fixed time-delay system

2.) At a targeted primary winding voltage

3.) At a targeted secondary winding voltage

Each method above has advantages and disadvantages.

Systems In General
All systems require a high overload capable start resistor. Without protection, the start resistor may go incandescent or melt during prolonged fault states. The start resistor should be fused with a fuse that opens before major damage. The resistor, fused or not, should be kept clear of all easily damaged objects such as wiring harnesses or circuit boards. Fusing is imperfect, there will always be a balance between resistor fuse life and resistor damage, but some protection is better than a guaranteed melt-down.

Timer Based Systems Timer-based systems close the step-start (sometimes called a “soft-start”) at a preordained time regardless of inrush or starting load current. Time based systems always add some unnecessary start delay to ensure they do not close prematurely. Time based systems also will close into a dead short, unless something detects the short and disables the timer. These systems will commonly start even if the inrush is not handled, such as when the start resistor has failed. The operator may think the inrush is working when it has failed.

The instant a power supply starts, initial impedance across the power line is quite low. This is, of course, the cause of inrush. By adding resistance in series with the powerline, inrush current is limited. Voltage dropped across the inrush start resistor prevents activation of a shorting relay until equipment load impedance is well past the point of inrush. When supply impedance rises to safe values, trigger voltage becomes high enough to close a start-resistor shorting relay. This system always insures the fastest smoothest start without excessive inrush. Time delay adjusts itself to the time necessary to prevent excessive current. The time will always be well beyond contact bounce periods.

As with the timer system, limiting resistors can be damaged by a power supply defect, but if the start resistor fails voltage triggered systems will not start. There not much chance of illusions they are working when not.

W8JI / CTR Engineering Step-start Board
My step-start design uses a commonly available heavy-duty high-current cube relay. The relay is specifically intended for powerline switching applications. More important, the relay is a very common hole pattern and readily available in 5 to 110-volt coil voltages. My board readily fits a wide range of applications. By repositioning two plug-in shunts, starting resistances of 11, 22, and 44 ohms are selected.

This board accepts European style wire terminated or removable plug blocks.  Terminals can also be eliminated and connections directly soldered to the board.

My board requires minimal changes in existing wiring, requiring only two small low-current trigger wires and interrupting of only one high current power line wire. This makes installation simple, fast, and clean-appearing. This board requires 1-1/2 inches or less vertical space and about 3 inches of length and width.

Additionally, we include a drill template and suitable hardware. All you need are common hand tools. 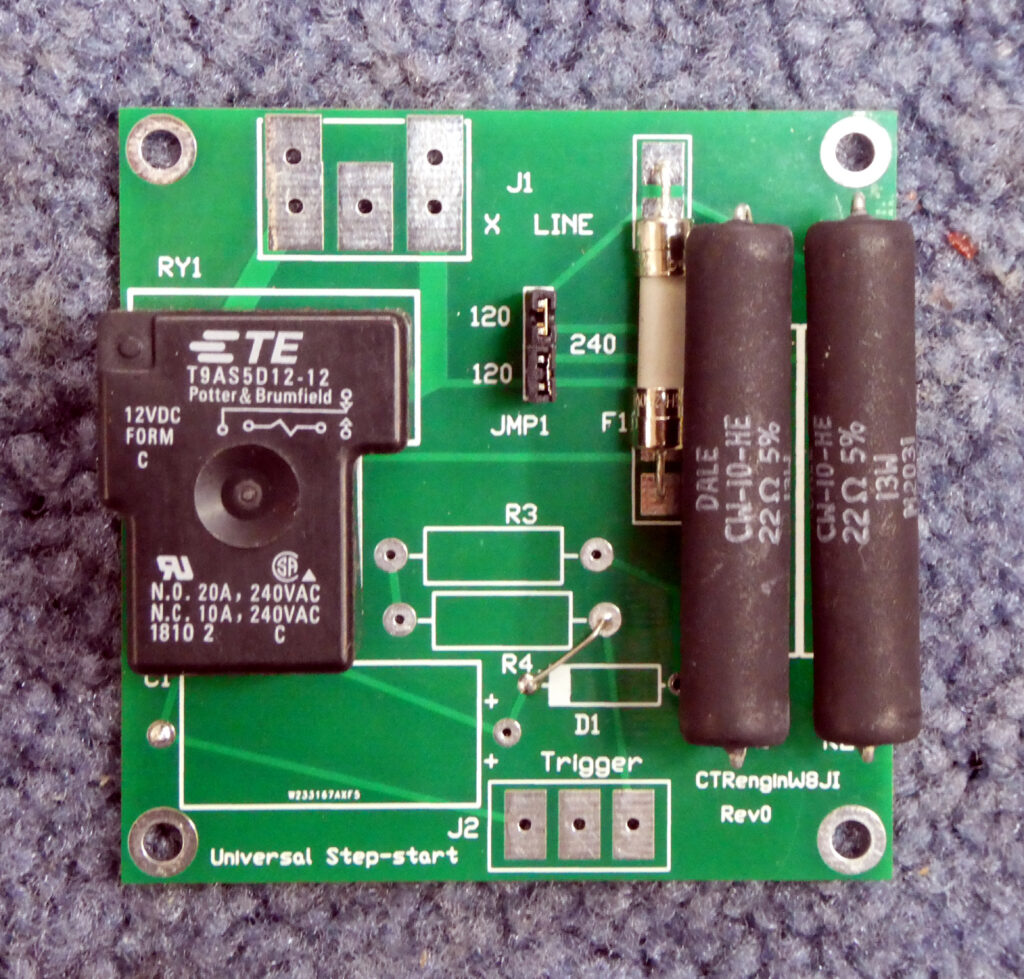 Original unit had complex wiring, no fusing, and was glued in place: 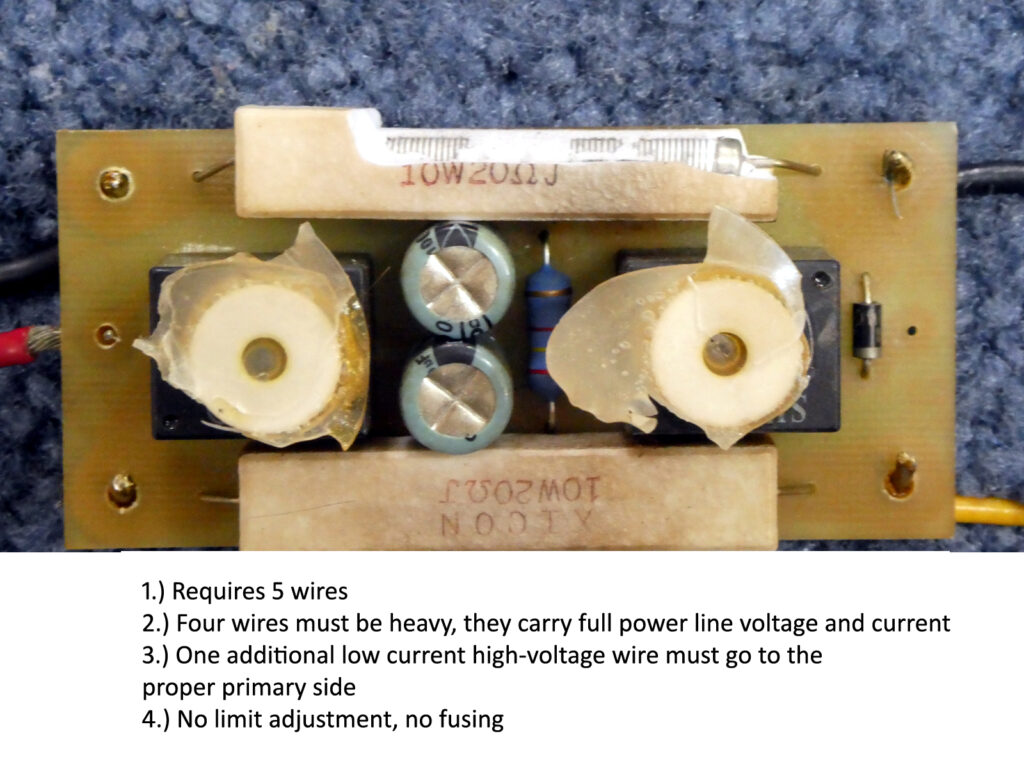 Replacement Universal Step Start activates from 12Vdc bus. Requires only two short small wires for trigger and interrupting of only one 240Vac lead! This makes a clean simple installation: 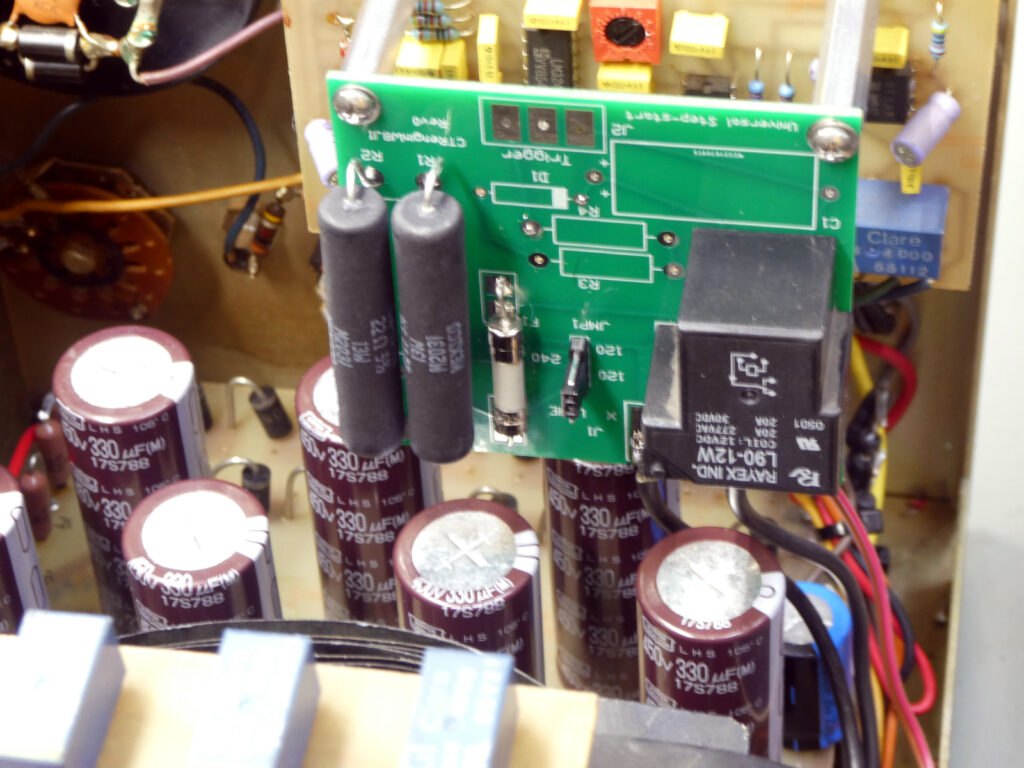